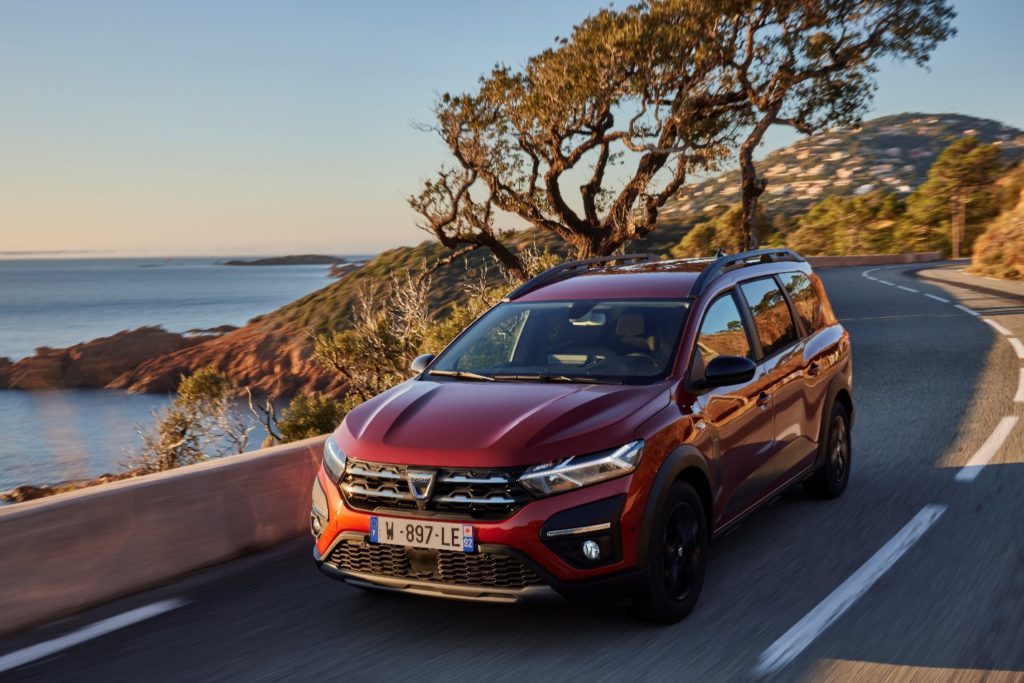 The new Dacia Jogger might seem an unusual choice in a series focused on remarketing potential, residual values (RVs), and fleet relevance of new-car launches, but there are many good reasons for choosing it. Together with the Dacia Duster, the Jogger represents a new generation of Dacia models with improved quality and design. Just like its stablemates, it will enter automotive markets at benchmark new-car prices, maintain low depreciation throughout its lifecycle and will reach used-car markets with strong residual-value potential.

The low depreciation makes it a total cost of ownership (TCO) champion. Rising list prices and energy costs, as well as a shortage of used cars and soaring residual values, all add to a climate of economic uncertainty. Smaller businesses in particular need to look more closely at their costs and buying or leasing decisions. Backed by a convincing cost performance the Dacia Jogger has the potential to win over commercial customers, but the brand’s image and reputation will be its biggest obstacle.

Three body styles in one model

The new Dacia Jogger replaces not just one but three previous Dacia models and combines characteristics of a van, an estate, and an SUV – all in one. Add to that the possibility of up to seven seats and this is a unique model. The Dacia Jogger has no truly comparable rivals.

As the focus for potential purchasers is getting plenty of car for their budget, other models in the relevant segment will be the likes of a Kangoo passenger van, a Fiat Tipo estate or a Skoda Scala. The typical seven-seater vans like a Grand Scenic or Volkswagen Touran or SUVs exist in a different league price-wise.

Specifications and dimensions versus main rivals

The new Dacia Jogger joins the Duster in demonstrating how far the Romanian car manufacturer has come, working hard on overcoming the reputation of being cheap and delivering poor quality.

Due to the unusual combination of several body shapes in one car, the Jogger looks a bit quirky, especially from the side and towards the rear. It is reminiscent of classic estates from the 1990s, but with a higher roofline. In any case, it is instantly clear that this car is all about space and versatility.

The interior greets drivers and passengers with a conventional style, including traditional control elements and instruments as well as an eight-inch touchscreen (not standard on the entry version). Material selection is aiming towards the simpler end of the spectrum, as you would expect, but the dashboard and door panels are cleverly styled and well executed. The third row seats adults comfortably enough and the two additional seats can be built in and out individually. With models of this size and price, the seven-seater option is a unique selling point (USP).

Initially, the Jogger is available with a 110hp petrol engine and a 100hp LPG engine. In some markets, such as Poland or Italy, LPG is very popular and in the light of soaring energy costs, the alternative fuel type offers additional saving potential. To put this into context, a spot-check calculation of fuel costs in Germany in March 2022 results in €11.50 per 100km for the petrol engine and €8.30 per 100km for the LPG engine (calculated with the WLTP consumption figures). A hybrid version will follow in 2023 and the smaller sibling Dacia Spring caters for battery-electric vehicle (BEV) demand.

Price is obviously the strongest selling point for the Dacia Jogger as you can buy a top version of it for under €20,000. Entry versions start at around €14,000. How convincing the price argument is becomes obvious when looking at the list-price development in the C-segment across Europe.

Since 2019, list prices in the C-segment increased by 15-20% in most markets, with the exception of a more moderate 7% in France and a 26% surge in Hungary. France also saw a stronger increase of 16% for the cheaper 5% of models (the blue line) offered in the segment, but a less pronounced increase for the more expensive and better-equipped versions.

With list prices exceeding inflation levels, increased economic uncertainty and rising energy costs, private and commercial customers will look more closely into the affordability of their mobility needs and the TCO of new cars.

The depreciation of a vehicle typically accounts for the largest share of its TCO. A lower depreciation, therefore, brings down TCO significantly, resulting in better leasing rates and lower monthly costs.

As a reference, the below example shows the TCO of the Dacia Lodgy TCe 100 seven-seater compared to three potential rivals on the French market. The overall TCO is the lowest, by a margin of almost €2,000 to the Skoda Scala 1.0 TSI. At €5,910 the depreciation only makes up 25% of the Lodgy’s TCO, 15 percentage points less than for the Skoda Scala (€10,160). The Dacia then loses some of its initial advantages due to fuel consumption and insurance costs. Keep an eye out for the TCO data of the Dacia Jogger included in Car Cost Expert upon its official arrival in the market.

Residual values are a major advantage

Dacia models repeatedly won the Schwacke and AutoBild Wertmeister Award in Germany thanks to their high relative RVs and subsequently low depreciation. The Dacia Jogger seems to be willing to follow their lead. Thanks to strong residual-value forecasts in combination with low list prices, the depreciation for the Dacia Jogger will be its major advantage across markets. In the countries shown in this interactive dashboard, depreciation will range between only €4,700 to €6,700 over two years and 60,000km in Germany and Hungary and go up to €7,500-10,000 in Italy. 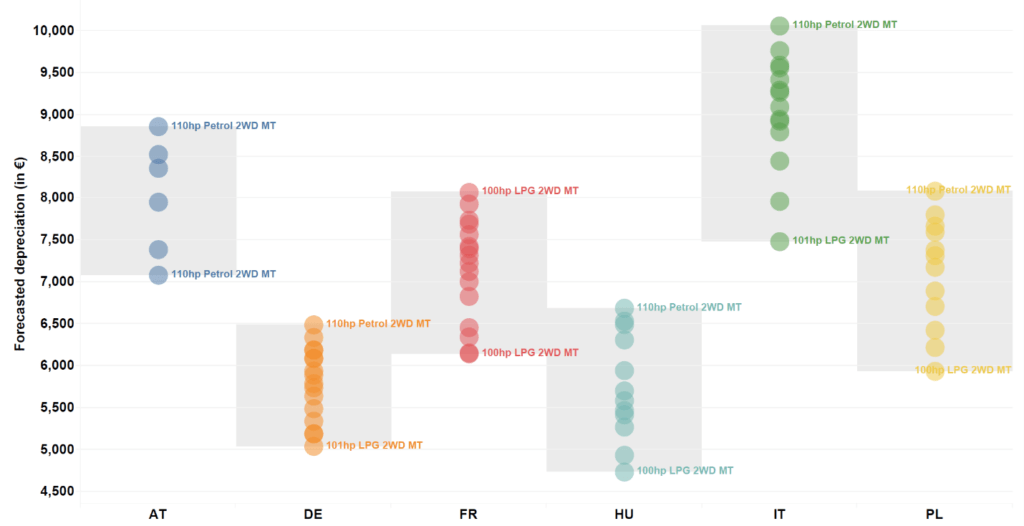 While the situation in Italy looks less favourable in the cross-country overview, this is mainly rooted in general differences in RV levels between countries. When compared to rivals in Italy, the Dacia once again manifests its advantage in terms of an extraordinary RV strength and therefore low depreciation. 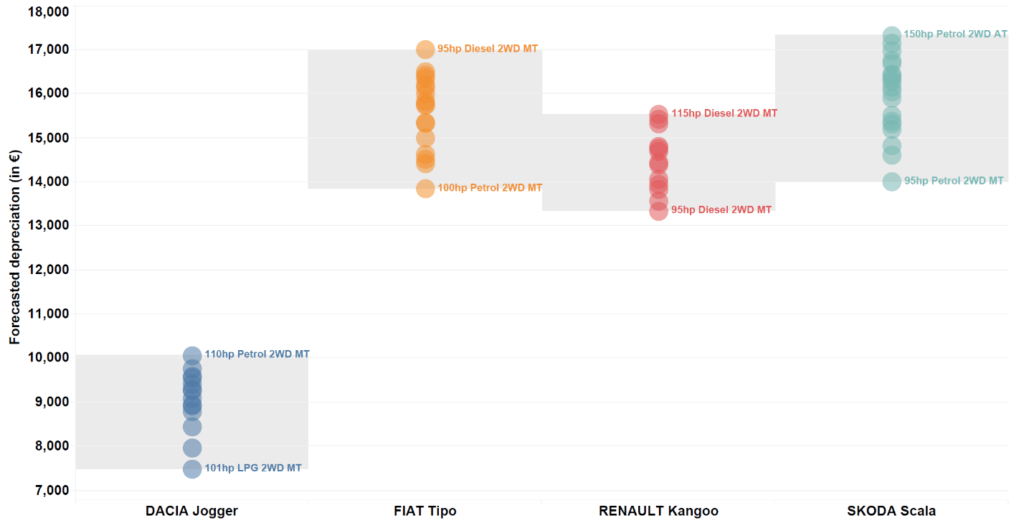 In Romania, Dacia’s domestic market (not shown in the dashboard), the situation is even more beneficial than in Germany or Hungary, with residual values around 74% and a depreciation of below €5,000 on any model.

Ulmis Horchidan, Autovista Group’s chief editor in Romania, explains that Dacia ‘made a big step forward in terms of quality and design and carved out a new segment for the Jogger, which does not have any direct competitors. The Dacia Jogger has the potential for family and commercial use and, most importantly, it is a good match for the economic reality of people.’ He explains that due to continuously rising residual values, energy costs and new-car prices, many brands simply become too expensive – as new cars and on the used-car market – and the Dacia Jogger is a good option in this market environment.

‘The Dacia Jogger has the potential for family and commercial use and most importantly it is a good match for the economic reality of people.’

Poland is the biggest Eastern European automotive market and with a 10% share, Dacia ranks third in private registrations, only exceeded by Toyota and Kia. However, when it comes to commercial registrations Dacia’s share drops to 3% and the Duster is the only Dacia model in the top 20.

Marcin Kardas, head of valuations and specification with Autovista Group in Poland, states that ‘the Dacia Jogger will not be a typical fleet car, but there still might be some potential due to current economic circumstances and increasing costs. The battery-electric vehicle Dacia Spring already sees rising commercial registrations, mainly with car rental companies.’

Jędrzej Ratajski, Autovista Group market analyst in Poland, adds that Polish customers see Dacia models as ‘cheap, practical and best value for money. The Jogger might change this point of view as it also looks nice and is well built. It can fill the gap that the phase-out of some vans leaves. For example, the passenger versions of Renault Kangoo and also Citroën Berlingo are at least temporarily not available.’

An option for car fleets

Does the improved quality, low depreciation and benchmark TCO make the Dacia Jogger a perfect model for car fleets?

So far, commercial registrations for Dacia vehicles remain the exception and the clear focus is on private customers. The Jogger will appeal especially to families in need of space and versatility at an affordable price. And this focus on private customers is one of the drivers of the strong RV performance.

However, Dacia has come a long way and there might be a small window of opportunity opening for a new target group of commercial buyers. Economic uncertainty, increasing costs and energy prices will make smaller businesses, in particular, look into their cost structures and seek improvements. The Dacia Jogger will certainly not be the car attracting user-chooser fleets, but for non-user chooser fleets or white fleets in need of cars as ‘workhorses’, as Ulmis Horchidan said, it could be a viable and rational option.

The one thing that stands in the way of rising commercial registrations and fleet adoption is the brand Dacia itself. Being the rational choice and a sign of understatement does not leave much room for automotive emotions.

But in the end, every technician or craftswomen also takes pride in the quality and reputation of the tools they use, so maybe also the non-user-chooser fleet purchase decision is a more emotional one than you would initially think. The brand of tool or car an employer provides for working hours, but oftentimes also for personal use, helps with employee satisfaction and retention. While Dacia has improved significantly on so many levels, it remains a brand not evoking desirability.